Methylene diphenyl diisocyanates (MDIs) are essential building blocks in the production of polyurethanes, urethane-prepolymers, and polyisocyanurate polymers in many industries.  Because of their reactivity and versatility of combining with an wide array of curatives and chain extenders, MDIs are used in countless diverse applications. End-uses for these quite versatile diisocyanates include foam products, cast elastomers, thermoplastic polyurethanes (TPUs), fibers, and CASE (coatings, adhesives, sealants & elastomers) products.   MDIs are the most-produced diisocyanate on a global basis.

Applications for Both Pure Monomeric and Multi-functional Polymeric MDIs

MDIs are available in multiple structural variants, from pure monomeric MDIs (MMDI) to multifunctional polymeric MDIs (PMDI). The performance delivered by the variety of MDIs differs significantly across the spectrum of MDI grades.  Formulators mainly use monomeric MMDIs in the production of prepolymers for cast polyurethane applications such as wheels & rollers and mechanical goods; TPU elastomers; and spandex fibers. The core markets for polymeric MDI manufacturers are rigid foams for appliance insulation, packaging and construction applications; as well as semi-rigid and flexible foams used in furniture, cushioning, transportation, vibration insulation, shoe soles and synthetic leather; and polyisocyanurate and thermoset foams.

Owing to its lower vapor pressure, worker inhalation exposure to MDI is generally lower than other of the diisocyanates referenced above.  However, like the other diisocyanates, MDI is a respiratory irritant and sensitizer. Users should always consult safe handling guidelines for isocyanates prior to use.  The International Isocyanate Institute offers many publications covering the safe handling of isocyanates in the workplace and the environment.

This report aims to provide information on aromatic MDI intermediates available generally available, and will include a description of the available grades, product standards, general properties, and application areas.

MDI Variants and Reactivity of the Isocyanate Function

MDIs are available as pure monomeric 4,4’-MDIs, isomeric mixtures of 4,4’-MDI with 2,4’-monomeric MDI, polymeric MDIs, and modified MDIs.  The isomeric positions of the isocyanate moieties influence their reactivity. In 4,4'-MDI, the two isocyanate groups are equivalent, but in 2,4'-MDI the two groups display highly differing reactivities. The isocyanate group at the 4-position (para) is approximately three to five times more reactive than the sterically-hindered group at the 2-position (ortho), depending on the reacting diol. It has also been noted that after one of the two isocyanate moieties on MMDI has been reacted, the second isocyanate shows a decrease in reactivity up to a factor of two, attributed to electronic effects.

Pure monomeric 4,4' - MDI, melts at ~38.5°C and is used where high reactivity and linearity are beneficial in the formation of hard segments in polyurethanes, such as in CASE applications, TPUs, and in fibers.  MDIs with higher 2,4’ contents exhibit lower melting points, slower reaction rates (cure speeds), increased working times, improved compatibility with the polyol component, and better compression set properties.  The ortho-rich MMDIs form prepolymers with lower viscosities, due to the differential reactivity of the two isocyanate moieties which reduces chain extension reactions. Ortho-rich MMDI has seen use as an alternative to TDI, with improvements in handling characteristics and costs.

Polymeric MDIs have average functionalities between 2.2 and 2.9 and consist of di-, tri-, tetra-and higher functionality compositions.  The term “polymeric” MDI is a misnomer, in that this class consists of monomeric MDI isomers and oligo-isocyanates products. Polymeric MDIs exhibit good room temperature storage stability, and remain liquid to approximated 0 °C.  They contribute to branching and crosslinking in the polyurethane elastomers.

The structures below depict the chemical compositions of the monomeric and polymeric MDIs.

The chemical structures of a carbodiimide-modified MDIs are shown below, depicting the carbodiimide structure and the trifunctional uretonimine structure. 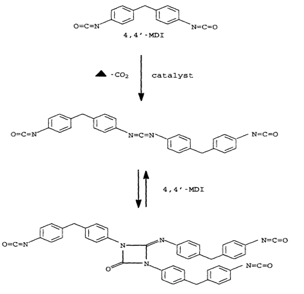 Pure monomeric MDI that has been purified to a high degree. It is a crystalline, white solid at room temperature and clear water-like when liquefied and supplied BHT free.  Purity is > 99.8% with a functionality of 2.0. Grades of monomeric MDI have strong resistance to discoloration and exhibits excellent discoloration stabilization against high temperature and ultraviolet light.

A flake version of Monomeric MDI is available for ease of handling and processing.  Pure monomeric MDI (MMDI) is delivered frozen in refrigerated reefer containers.

Ortho-rich MDI is a pure monomeric diphenylmethane diisocyanate (MDI) containing 45~55% 2,4’-isomer content. Ortho rich MDI, with a functionality of two, is a solvent-free, light yellow liquid when stored at 20~30℃. It is easily handled at room temperature.

Ortho-rich MDIs with higher 2,4’- contents exhibit slower reaction rates with polyols, increased working times, improved compatibility with the polyol component, and produce prepolymers with lower viscosities due to the differential reactivity of the slower reacting 2’-isocyanate which promotes end-capping of a polyol vs. chain extension.

Processors use ortho-rich MDI in the non-foam polyurethane area as prepolymers for coating, adhesives and sealants, and in the flexible, semi-rigid polyurethane foam area and related applications.

Since the carbodiimide has a harder structure vs. the urethane structure, carbodiimide modified MDIs show good durability, hydrolysis resistance and good mechanical properties.  Also, it is used to improve safety of polyurethanes at low temperatures since it has a positive effect on improving the comparability of free NCO and polyol in manufacturing prepolymer.

Grades of Polymeric MDI are available with an average 2.7 functionality and a maximum viscosity of 220 cps at 25 °C.  It is easily handled and stored down to -20℃.  Polymeric MDIs consists of mixed monomer and trifunctional-dimers , with decreasing amounts of trimers, tetramers and oligomers above the tetramer stage.

MDI grades are generally packaged in 250 Kg. drums, IBC totes and bulk ISO Tanks.  Monomeric MDI must be shipped in drums within refrigerated reefer containers at -20 °C to avoid dimerization.

If you need monomeric or polymeric MDIs for your market applications, partner with Gantrade. Our team, armed with a wealth of technical knowledge and expertise, can guide you to the best polyurethane solution for your applications. Contact Gantrade today to get started.  Gantrade offers a wide portfolio of polyols, chain extenders and curatives to meet global needs for polyurethane applications.