Adipic dihydrazide is used as a difunctional crosslinking agent in paints and coatings for certain water-based acrylic emulsions.  It is used as a hardener for epoxy resins and a chain extender for polyurethanes.  A small use is as a formaldehyde scavenger preventing the liberation of formaldehyde.

At Gantrade, we have enjoyed serving the paints and coatings industry with intermediates for more than 45 years. Our team of technical experts can help you get the supply you need and advise on the formulation necessary to optimize your products for marketplace growth.

The chemical structure of Adipic acid dihydrazide (ADH) and the reactive sites are shown below. 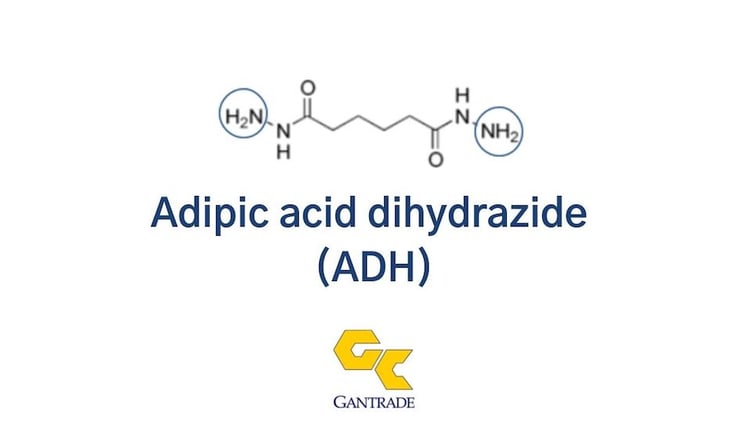 The applications of ADH are facilitated by the nucleophilicity of the amine function (good reaction characteristics), the good overall properties and weatherability of cured systems. The moderate solubility of ADH in water (50 g./liter) and common organic solvents facilitates the use of ADH in aqueous and solvent based systems.  Important application areas are described below.

A notable fact with regard to ADH in epoxy formulations is that each of the primary amine end groups has a functionality of two, so the ADH molecule has an equivalency of four per epoxy moiety.  Accordingly, the active hydrogen equivalent weight of ADH is 43.5.  When formulated with epoxy resins, the ADH index can range between 0.85-1.15 of stoichiometric proportions, without a significant effect on mechanical properties.

The cure temperature for epoxy resins (glycidyl types) formulated with ADH is influenced by the melt-out temperature of the ADH, which allows an extended pot life at low temperatures.  Storage stability can be up to six-months at room temperature, with cure times of about one-hour at 130 °C.  Cure rates can be accelerated using tin or titanate catalysts, or imidazoles.

Rigid and flexible epoxy adhesives have been formulated as one component systems that can be stored at room temperature using ADH as a latent curing agent.  Rigid epoxy adhesives are based on bisphenol A and novolac epoxides.  These rigid adhesives exhibit excellent cohesive and adhesive properties to a wide variety of surfaces.  Flexible epoxy adhesives produce more pliable bonds which better accommodate bond line stresses or differential substrate expansion rates.  Flexible epoxy resins include aliphatic di- and tri-epoxy resins such as hexanediol diglycidyl ether and poly(oxypropylene) diglycidyl ethers.  Semi-rigid epoxy-based adhesives utilize mixtures of both classes of epoxy resins or rigid formulations using flexibilizers.

ADH is added to the water phase in a PUD.  Crosslinking occurs during the drying and film coalescence process which is ideal for maximizing the film properties including gloss, scrub, stain and wear resistance and durability.  Other crosslinking methods where crosslinking occurs prior to film coalescence exhibit reduced performance properties including poor flow and leveling.  The full reactivity characteristics of ADH are ideal for PUR systems. Alternative curatives which show incomplete crosslinking due to slow reactivity and the lack of curative mobility in a dry film will also compromise performance.

A large swath of our portfolio of customers at Gantrade produces acrylic resins to create high-performance products across a variety of industries worldwide. The leading crosslinking technology for acrylic emulsion polymers is ambient temperature crosslinking chemistry based on diacetone acrylamide (DAAM) or acetoacetoxyethyl methacrylate (AAEM) and adipic acid dihydrazide (ADH) monomers. This technology, known as “keto-hydrazide crosslinking,” involves the direct reaction of the pendant ketone moiety on the DAAM-acrylic or AAEM acrylic polymer segment and the hydrazide moiety of the ADH, with the evaporation of water in the film-forming process.

This self-crosslinking technology has been adopted in high-durability paints and coatings for architecture, wood, and concrete surfaces, and more. The DAAM/ADH pair is also used in crosslinkable sizing agents, thickeners, adhesives, and sealants.

The DAAM/ADH and AAEM/ADH crosslinking system provides several key benefits for formulators and consumers, from reducing safety concerns to improving performance properties and much more. These benefits include:

Both intermediates are formaldehyde free, unlike melamine crosslinking chemistries. DAAM and ADH are easily dissolved in warm water and in many other monomers.  Finally, the by-product of the crosslinking reaction is water.

Gantrade’s sales specification for ADH are given below.

If you are ready to leverage ADH in your technology, Gantrade maintains strong, high-quality inventories of these intermediates.  In addition, we readily provide product information, technical support, and product sales information, so you can make informed decisions. More than a supplier, we view our role at Gantrade to be a partner you can trust as you grow your business. 45 years of service to industries like paints and coatings and adhesives and sealants is a testament to this approach.