Durable, Ambient Temperature, Self Crosslinkable Acrylic Emulsions Based on DAAM/ADH

The leading crosslinking technology for acrylic emulsion polymers is ambient temperature crosslinking chemistry based on diacetone acrylamide (DAAM) and adipic acid dihydrazide (ADH) monomers. This technology, known as “keto-hydrazide crosslinking,” involves the direct reaction of the pendant ketone moiety on the DAAM-acrylic polymer segment with the hydrazide moiety of the ADH, with the evaporation of water in the film-forming process.

The highest adoption of this ambient temperature, self-crosslinking technology has been in high-durability paints and coatings for architecture, wood and concrete surfaces, and more. The DAAM/ADH pair is also used in crosslinkable sizing agents, thickeners, adhesives, and sealants.

Attributes of the DAAM/ADH Crosslinking System

The DAAM/ADH crosslinking system provides several key benefits for formulators and consumers, from reducing safety concerns to improving performance properties and much more. These benefits include:

General Properties of DAAM and ADH

DAAM monomer is water-soluble and soluble in most organic solvents.  The homopolymer of DAAM has a glass transition temperature (Tg) of 85 oC.   and it is water soluble.  ADH is moderately soluble in water. 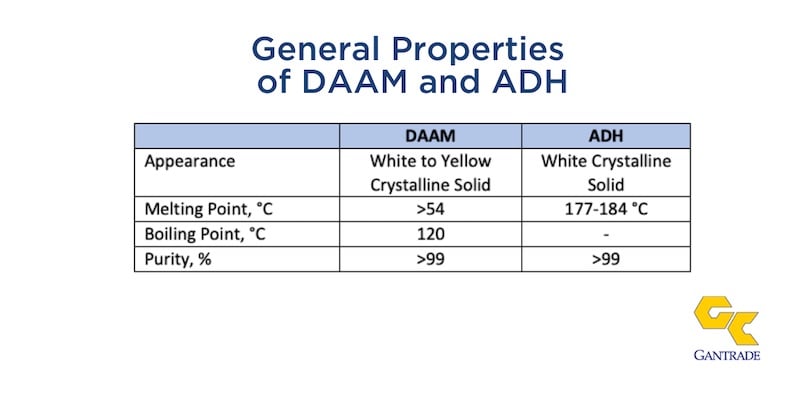 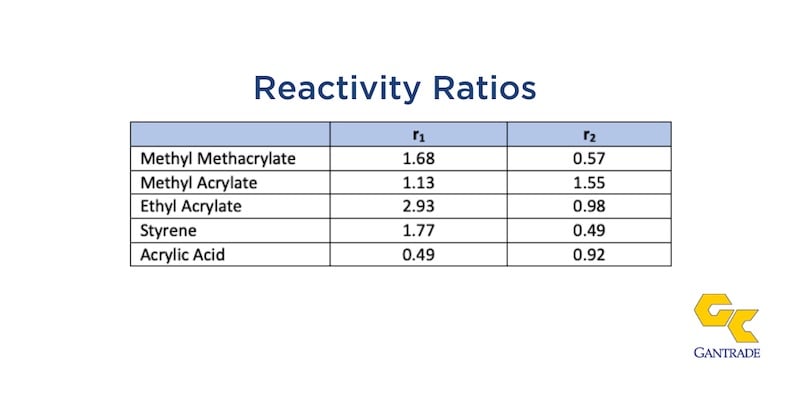 The Chemistry of DAAM/ADH Crosslinking Monomers

The circled moieties in the chemical structures below highlight where the crosslinking happens with these two molecules:

The DAAM content in the functionalized polymer is held below 5 percent to minimize chain transfer reactions, which occur with this molecule, to afford good “in-can” storage stability and to limit the influence of premature crosslinking on polymer chain diffusion in the later stages of the film-forming process.

Acrylate-DAAM copolymers post-react with ADH to form crosslinked systems under ambient conditions.  ADH is a difunctional crosslinking agent which remains partitioned in the water phase outside of the emulsion particles.   Here is a view of the ADH structure:

After adding ADH to a neutralized acrylic emulsion containing DAAM in the copolymer, the system remains stable when stored in the emulsion environment in the presence of ammonia or amines.  The ketimine-forming reaction is acid catalyzed.  Therefore, the crosslinking reaction rate is high at low pHs and almost non-existent at a pH of 8 or above.  Accordingly, the functionalized polymer and ADH can co-exist with excellent in-can stability when the emulsion pH remains above neutral.   The keto-hydrazide crosslinking reaction is promoted by the loss of water and concomitant volatilization of ammonia or an amine during the film-forming process.  The lower volatility amines can improve in-can stability as well as regulate the rate of cross-linking during the film-forming process. 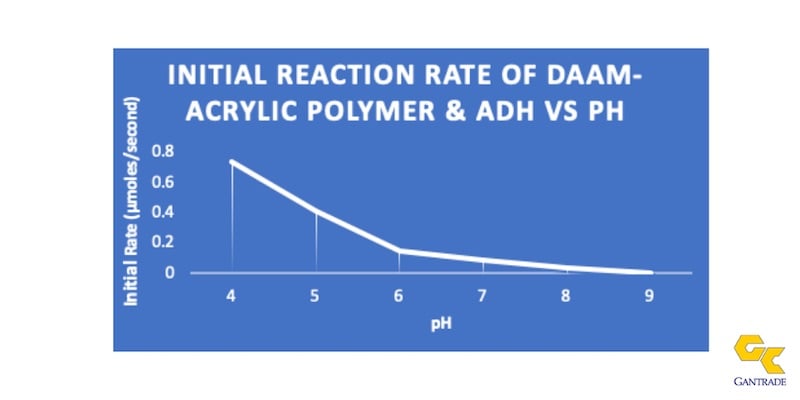 Mechanism of the Crosslinking Process

Diacetone acrylamide (DAAM) is copolymerized into an acrylic polymer to first make the emulsion polymer crosslinkable via a pendant ketone carbonyl moiety.  DAAM concentration is ~1-5 wt. % of the monomer mixture.  The emulsion is first neutralized with ammonia to a pH ≥ 8 and adipic dihydrazide (ADH) is then added to the emulsion as an aqueous solution.  The ratio of DAAM to ADH is ~ 2.1-3.0 to 1.

The above ratio can be varied to improve in-can stability or to increase the crosslink density.  Above a pH of 8, the in-can storage stability will be greater than one year, as the DAAM and ADH can coexist at the higher pH values in the emulsion state.  As stated above, the ADH mainly remains partitioned in the water phase outside the emulsion particles.

Upon drying off the water and evaporation of the ammonia, coalescence of the film occurs and the pH decreases (becomes acidic). The crosslinking reaction rate increases as the pH decreases in the later stages of film formation.  The crosslinking process then takes place (acid catalyzed) with the formation of a chemical bond between the DAAM and the ADH, called a ketimine moiety, shown below.  The reaction by-product is water.

To better understand this technology, see the depiction of the coalescence and the crosslinking process below.  As shown in the depiction, the ADH is mainly portioned in the aqueous phase until water is evaporated off.  We also speculate that the ammonia or mono-functional amine base can tie-up the keto moiety, thus retarding the hydrazide reaction until these volatile agents are liberated in the drying process.  Carboxylic acid moieties on the polymer backbone are neutralized with the presence of ammonia or an amine. 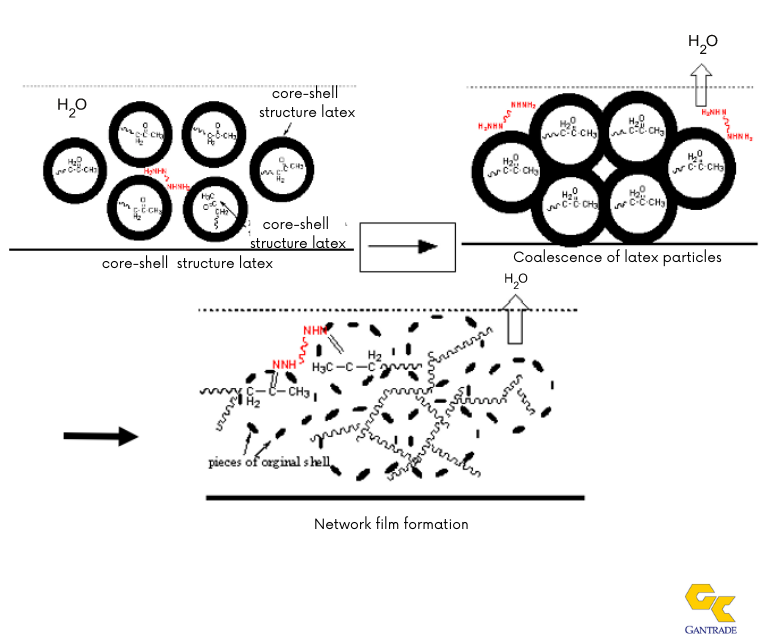 The range of monomers that can be used with DAAM is extensive.  Monomer feeds can include:

The monomer composition is often dictated by the desired Tg of the polymer film, from -30 °C to > 30 °C.  Reference Tg values of key monomers are provided below.

To see examples of emulsion compositions you can use for copolymerization with DAAM, please consult the following recipe and tables. Key performance characteristics are shown to exemplify the attributes of DAAM-ADH crosslinked compositions.

Self-crosslinking diacetone acrylamide self-crosslinking can be used in multiple applications, the most prominent ones being durable interior and exterior paints as well as coatings for architecture, wood, and concrete surfaces. Keep on reading to discover how to formulate a DAAM-based coating as well as its performance qualities.

To create a DAAM-based coating for architectural materials, you’ll want an emulsion composition with the following compositional characteristics:

Below is some valuable reference information on DAAM’s coating performance (paint contained TiO2):

For wood coatings, the DAAM emulsions can follow the guidelines below:

As you analyze diacetone acrylamide's performance in the table below, note how DAAM has a significant impact on stain resistance.

The stain resistance of a coating was evaluated by wiping the wood with a tissue holding the staining material and subsequently washing the wood surface with water 18 hours later. 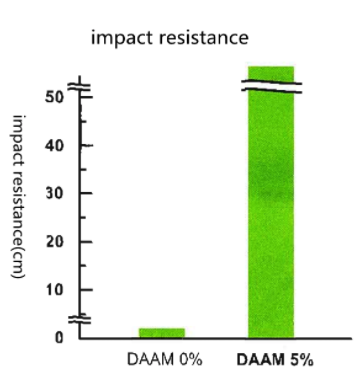 In addition, during a heating and cooling cycling test, coatings without DAAM can tend to crack. However, with a DAAM-ADH system coating, this is less likely. See the pictures blow to observe the difference. 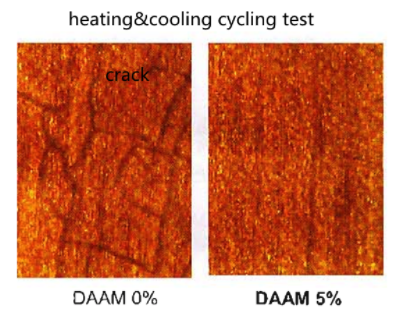 Concrete coatings are also another application of DAAM. To prepare the coating, here are some characteristics you’ll want your emulsion to have:

The table below provides some key information on how DAAM-ADH crosslinking impacts concrete surfaces once applied as a coating.

The keto-hydrazide crosslinking system based on the monomers DAAM and ADH represents the most advanced stage of technology for acrylic emulsion cure chemistry.  DAAM levels can be up to 5% in the acrylic copolymer, but levels of about 3-4% are optimum.  Formulators can optimize the polymer properties, in-can emulsion stability, film coalescence, and dried film performance by adjusting the levels and ratios of DAAM and ADH used in the final emulsion.

In addition to both safe and convenient handling, this ambient temperature crosslinking system enhances film mechanical properties, stain, water, chemical, and block resistance, toughness, impact strength, scrub resistance, adhesive properties, and more for multiple applications.  This range of attribute achievement is a result of the achieving attaining high gel fractions (crosslinked polymer chains), but only after emulsion particle coalescence and the beginning of polymer-chain interdiffusion.   The highest adoption of this self-crosslinking chemistry has been in high performance paints and coatings for architecture, wood, and concrete surfaces, and more.

A critical element of this crosslinking technology is “in-can” storage stability.  The keto-hydrazide cure reaction is inhibited by the presence of water in the emulsion state, ammonia and amines, and a pH value above 8. The ADH mainly partitions into the aqueous phase, away from the DAAM molecule.   Thus, the keto-hydrazide crosslinking does not occur until a sufficient faction of the water has evaporated and the ammonia or amine is liberated, allowing the pH to decrease below 7.

If you’re ready to leverage DAAM and ADH for your technology, Gantrade maintains good, high-quality inventories of both intermediates.  In addition, we readily provide product information, technical support, and product sales information, so you can make an informed decision.

Whether you want to know more about the capabilities of DAAM-ADH systems or you want to understand the inventory options we offer, contact Gantrade to speak with one of our team members.