These unique hydroxyl-terminated caprolactone (meth)acrylate [HCL(M)A] monomers can be incorporated in various acrylic resin systems where they can be subsequently crosslinked.  The primary hydroxyl end-groups react particularly well with conventional melamine-formaldehyde crosslinking agents and multi-functional isocyanates to afford high performance coatings and films. Formulators also use our caprolactone (meth)acrylate monomers in the preparation of UV-curable urethane acrylates and UV-curable acrylate formulations where the wide range of viscosities of the oligomeric monomers provide good formulating latitude.

By positioning the primary hydroxyl function away from the main chain in an acrylic copolymer, formulators select these oligomeric caprolactone meth(acrylates) to achieve the following benefits, which also apply to the urethane acrylates:

Formulators use crosslinkable acrylic and styrenic copolymers based on HCL(M)A monomers in architectural coatings, OEM product finishes, metal coil coatings, and special purpose coatings.  Protective coatings such as fabric and leather finishes, floor polishes, and wood and paper coatings are also based on these modified acrylate monomers.  After copolymerization and film formation, crosslinking is achieved through the primary hydroxy with melamine or multifunctional isocyanate curing agents.  Coating technologies include water-borne and solvent based systems and powder coatings.

The higher reactivity of the hydroxyl function in HCL(M)A versus that based on HEMA is shown in the figure below.  The data is based on measuring the residual NCO content over ten days.  The isocyanate was a HMDI type polyisocyanate, and the more efficient and complete use of this isocyanate is revealed after ten-days. 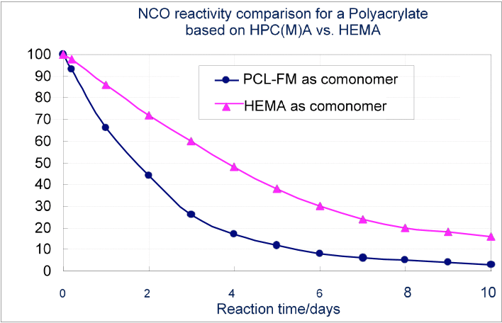 UV/EB cure is an environmentally friendly technology, since it does not require volatile organic compounds (VOCs), no by-products are eliminated,  and is a low energy, high productivity process.  Recent growth rates in this production area have been in the 10 percent range. The HPC(M)A oligomers offer distinct advantages in UV/EB-cured systems including their inherent low viscosities.   A basic photopolymerizable formulation consists of a polymerizable vehicle (oligomeric acrylate binder) and a light-sensitive compound such as benzophenone or benzoin, capable of initiating a free-radical polymerization through absorbed light energy.

Formulators can use hydroxy-caprolactone (meth)acrylates directly as UV-curable binders or reacted with isocyanates in a ratio of 2:1 to produce urethane acrylates. Preferred isocyanates are the aliphatic IPDI, HDI and H12MDI; also multifunctional isocyanates such as HDI-biuret .  Through the selection of the appropriate HCL(M)A monomer or associated urethane acrylate, coatings and printing inks can be optimized for superior flexibility, hardness, durability, adhesion properties, and specific processing characteristics.  The HCP(M)A series monomers can be formulated with other acrylates and multi-functional acrylates like TMP triacrylate.

The use of caprolactone acrylates has been growing in all aspects of the UV/EB cure market. The urethane acrylates are ideal for the fast-growing world of 3D printing.  Other applications include coatings, laminating and pressure sensitive adhesives, graphic arts, doming resins, and cure-in-place gasketing systems.  An advantage inherent with the HPC(M)A oligomeric monomers is their low viscosities (the caprolactone chains have low MWDs).  This is seen in the initial viscosity data of the UAs shown in the table below.

The table below compares the mechanical properties of cured urethane acrylate based on an HCL(M)A vs. systems based on HEA (hydroxyethyl acrylate).  The system using FA2D exhibited a lower modulus value, but it also featured a significantly higher degree of compression repair as measured by nanoindentation using a displacement at a maximum load value (Elionics Corp.).  The hardness values can be increased using a tri-isocyanate intermediate in place of the IPDA or a multifunctional acrylate crosslinking monomer.  You can get this result while maintaining the compressive repairability of the HCL(M)A based UAs.

The table below lists the wide range of options available in the Placcel® caprolactone acrylate and methacrylate series produced by Daicel Corporation.  Daicel is the only producer of the methacrylate (FM) series.  The advantages of the Daicel product line include high purity, low color and odor, very low level of residual catalyst, and a broad spectrum of Tgs (glass transition temperatures).  Levels of di(meth)acrylate in the caprolactone (meth)acrylate monomers are very low (<< 1%) and acrylic polyols prepared from these monomers do not show the presence of gels.

The HCL(M)A monomers are available in 200 Kg. and 1 MT IBC totes with MEHQ as the stabilizer. 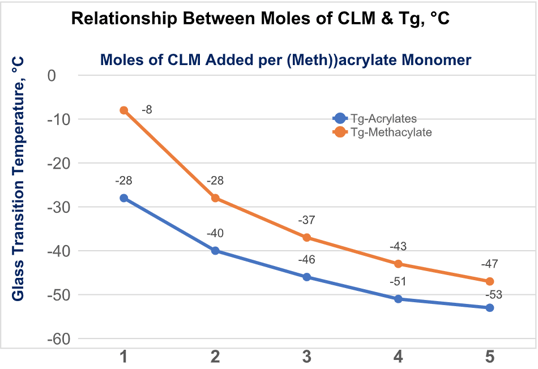 The free-radical copolymerization reactivity ratios r1 and r2 and the parameter Q and e are shown in the table below.  Q values indicate the degree of stabilization of the growing free radical; Q values > 0.35 indicate good stabilization. The e-value indicates the electronegativity of the double bond.  e Values < 0 show an electron rich double bond.  Data for HEMA (hydroxyethyl methacrylate) and MMA methyl methacrylate) are included as a comparison.

The reactivity ratios for the Placcel FM monomers and styrene are indicative of very good random copolymerization kinetics.  As the chain length of the polycaprolactone chain increased the r2 value decreased.  As can be observed with the methacrylic monomers MMA and HEMA, the reactivities of the polycaprolactone methacrylates are very similar to the standard methacrylate monomers.

Caprolactone methacrylate-modified styrene-acrylic resins were prepared in solution using the recipe below.  The temperature was held at 120°C during the addition of the monomers. AIBN was added over a period of four hours at 120°C. Thereafter, the polymerization was continued for four hours additional to obtain a transparent solution with the properties shown below, without any appearance of gel content.

The above acrylic resins were blended with an HDI-biuret multi-functional isocyanate at a OH/NCO ratio of 1.0 and coated on a steel plate.  Contiguous films were obtained by drying and curing the blend compositions. Film performance designated as “O” indicates an excellent result.  Those designed by a “Δ” indicates poor performance.

“Comb-shaped” polymers are a category of materials consisting of a low density of side chains on a linear polymer-backbone structure. This category of comb polymers can be designed using acrylic and styrene monomers copolymerized with caprolactone acrylate oligomers to create the requisite branches on the high-polymer backbone. The side chains mainly affect the melt and solution rheological properties of polymers, such as the extensional viscosity, shear viscosity and the important polymer strain hardening behavior under extensional deformations. Application areas include foam and film where strain hardening and extensional viscosity behavior are of high importance.

Side chain (the comb teeth) entanglement is required for the enhanced performance associated with comb polymers. Entanglement MWs can be reached at the higher chain lengths of caprolactone (meth)acrylate oligomer monomers. The key parameters affecting performance enhancements include the MW of the side chains and the side chain density on the backbone structure.  Formulators achieve these super-elastomeric properties through optimization of these parameters. Hyperbranched structures have also been synthesized using these caprolactone oligomeric monomers.

Daicel’s product line of hydroxy-functional caprolactone (meth)acrylates expand the options for formulators to design specific attributes into an array of acrylic resins and UV-curable urethane acrylates. By selecting the appropriate degree of caprolactone modification in the (meth)acrylic monomer, these monomers allow optimizations of the following properties within an acrylic polymer or urethane acrylate system.

The advantages associated with the Daicel line of HCP(M)A monomers include high purity, low color and odor, and very low residual catalyst levels. The content of diacrylate monomers is very low, allowing gel-free acrylic polyols to be prepared from these monomers.

To explore how our range of caprolactone (meth)acrylic oligomer monomers can address your unique polyurethane elastomer application, partner with the expert teams at Gantrade Corporation. Our teams, armed with a wealth of technical knowledge and expertise, can guide you to the best solutions for your applications. Contact Gantrade today to get started.  We offer a wide portfolio of acrylic monomers to achieve your high-performance requirements.