Vinyl acetate monomer (VAM) is a significant intermediate used in the production of a wide range of resins and polymers for paints & coatings, adhesives, glues & sealants, elastomers, textile finishes, paper coatings, binders, films, and a myriad of other industrial and consumer applications.  It efficiently homo-polymerizes to polyvinyl acetate (PVA),  and VAM can be used in numerous random copolymers and terpolymers such as ethylene-vinyl acetate copolymers, vinyl-acrylic resins, vinyl acetate-acrylic acid copolymers, and vinyl acetate-vinyl chloride copolymers.  With the wide diversity of polymerization options, VAM has allowed the design of products with a wide spectrum of cost and performance profiles. 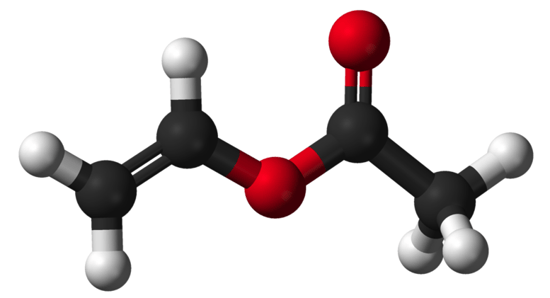 The largest end-use for VAM is in the production of polyvinyl acetate resins as a base for adhesives and coatings, as well as a feedstock for derivative resins like polyvinyl alcohol (PVOH).  Polyvinyl acetate emulsions and resins are low in cost and convenient to use,  and they have a wide application range.  PVA is likely best known as the base component of household white glues used for bonding paper, fabrics, wood, and plastic.

Worldwide consumption of VAM measures over 4 million metric tons, with an annual growth rate of about 4.7 percent.  PVA represents over half of the total usage of VAM.  In addition to uses in paints, coatings, adhesives, and binders, PVAs are feedstocks for other large-volume systems such as polyvinyl alcohol (PVOH), polyvinyl butyral (PVB,) and polyvinyl formal (PVF).  PVOH is the largest use for PVAs, followed by adhesives and paints & coatings.

VAEs with more than 60 percent VAM content are used in coatings, adhesives, cements, and plasters.  VAEs produce low-VOC emulsion systems, because the ethylene monomer serves as a plasticizing monomer and reduces the need for coalescing agents or plasticizers. Commercial VAE emulsions exhibit Tgs between -15 °C and +15 °C.  Formulators may freeze-dry VAE emulsions to produce redispersible powders (RDPs), often referred to as “solid latexes.”

VAM polymerization is easy in all processes, emulsion, bulk, solution, and suspension.    Commercial VAM sources have purities greater than 99.9 percent,  with trace levels of water, acetic acid, and acetaldehyde.  Water and acetic acid do not have much of an effect on polymerizations, but acetaldehyde acts as a chain transfer agent and has a significant effect on the viscosity of the final polymers.  Formulators may polymerize hydroquinone-stabilized material without removing the HQ.

VAM polymerizations are exothermic, requiring provisions for cooling. In emulsion reactions, polymerization times are about 4 hours at temperatures of 70 °C.  Formulators must maintain the pH at near neutral level during polymerization to minimize VAM hydrolysis.  To ameliorate the hydrolysis reaction, they can use a buffer such as sodium acetate.

For a thorough explanation of how monomer reactivity ratios can be used to predict copolymer compositions, and a tables of reactivity ratios for comonomer pairs, please see this lecture from Stanford University.

Another unique feature of VAM free radical polymerizations is their propensity to undergo chain transfer reactions that afford branched architectures.  This dynamic is due to chain transfer reactions between the growing polymer chain free radical and abstraction of an acetate hydrogen position (predominant mode) or a tertiary hydrogen atom within the polymer chain.  Branching process increases in significance as the conversion proceeds, with decreasing monomer concentrations.  Branching results in PVAs with lower tensile properties, increased ductility, and lower solution and melt viscosities. The branches are both short and long chain (above the critical entanglement length), with the short chain branches responsible for the lower strength properties.

For further details on handling and health information, refer to the SDS for VAM.

Gantrade is one of the main global suppliers of high-purity vinyl acetate monomer. We maintain robust inventories in North America and Europe to meet global demand.  Our package sizes range from 20 MT (44,080 lbs.) tank trucks to rail cars and steel drums.

Gantrade’s sales specifications for VAM are displayed in the chart below.

Vinyl acetate monomer is a key intermediate used in the manufacture of homopolymers, copolymers, and derivatives for adhesives & sealants, paint & coatings, packaging films, construction materials, textile & paper finishes, and a myriad of other applications. VAM is a highly versatile monomer, creating copolymers such as ethylene-co-vinyl acetate, acrylic ester-co-vinyl acetate, vinyl chloride-co-vinyl acetate, etc. The broad copolymer options allow the design of numerous polymer systems to meet the economics and performance requirements of a multitude of industrial and consumer applications. The largest use for VAM is in polyvinyl acetate homopolymer, which is used in adhesives and paints, offering ease of use and good adhesion properties to paper, fabrics, wood, plastics and many other substrates at a low cost.

For more information on how VAM can work for you, contact Gantrade today.